Today I was privileged to sample the Glenfiddich Cask of Dreams. I have been so blessed and have had so many dreams come true that I feel guilty writing about them. Yet, tonight was another dream come true -- because I was one of the first people to taste the Cask of Dreams whisky from Glenfiddich, which was aged in one of the casks that people were invited to sign last year, in San Francisco.

The liquid was carefully hand-selected to fill the eleven casks from a variety of Glenfiddich Scotch that was already 14 to 16 years old. The eleven Casks of Dreams (made of uncharred new American oak) were filled with the liquid and sampled every 3-4 weeks for about 3 months...until Brian Kinsman (master blender for William Grant & Sons) deemed it was ready. Then it was bottled and 3500 of those bottles are already for sale in the US. The bottle strength is 48.8% ABV (just under cask strength).


Note: Uncharred oak is rarely used to age Single-Malt Scotch Whisky because the effect of the wood is so strong that it can be overwhelming in a short time. Due to the strength of the wood effect, you see that Mr. Kinsman had to be careful to not overdo the aging.

This is a US-only expression, celebrating the Glenfiddich fans that wrote their dreams on the eleven casks.  You probably want to know the answer to the obvious burning question: How much for a limited edition US-only commemorative bottling? About $100 - if you can find it, grab it. It's awesome. It's selling like hotcakes, so don't wait. You'll regret it.

Now to prove it's real: 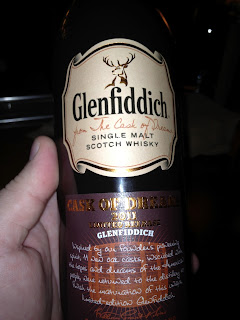 The sample I had was unlike any other Glenfiddich I have ever had, including Snow Phoenix. The nose opens up nicely with a little water. You get ripe fruits -- like apricots and peaches -- and you'd think that this had been aged somewhat in ex-Sherry casks, but I am assured that the whisky was aged in 100% uncharred American oak. I also perceived cinnamon and pepper and the finish has hints of tobacco and leather. The nose has hints of walnuts and hazelnuts and there is a pronounced absense of strong vanillins (vanilla, caramel that you might expect in a "typical" Speyside whisky). In my opinion, the Cask of Dreams beats the 15-year-old expression that is otherwise my favorite from Glenfiddich's standard lineup. I tasted the 15 side-by-side with the Cask of Dreams to have a valid point of comparison. You know, for science. :-)

Good news: Glenfiddich is doing a 2012 Cask of Dreams and so you might find this year's casks in a town near you in the coming months. Follow @GlenfiddichMB on Twitter and he'll likely update you on the progress of the casks. New cities this year are Phoenix and Las Vegas, but I don't know the whole list.

BTW, mad props to Brian, our friendly bartender at Fifth Floor Restaurant in the Hotel Palomar off Union Square in San Francisco. Also, it was great to have a chance meeting with Rick Dobbs of the Cocktail Gogo blog who is @martinigroove on Twitter.
Posted by Unknown at 5:46 PM