Today, some colleagues and I had reason to drink most of what remained of my bottle of Bruichladdich 12-year-old Second Edition. So, as it turns out, I celebrated a bit early. :-)

As with most pre-2012 Bruichladdich's, this expression is no longer available (it was a limited edition, as were most of their expressions before 2012).

I can recommend it (if you can find it). My buddies loved it. This whisky is remarkably dark in color for a whisky aged exclusively in ex-Bourbon barrels. It is quite smooth...and fruitier than you'd expect from Bourbon wood.

The transaction is now imminent...Bruichladdich Distillery Company is to become part of Rémy Cointreau. I imagine that Bruichladdich will retain a fair bit of independence, simply because Rémy has no extant spirits properties in the Scotch space.

People know I'm a big fan, not just of Bruichladdich's products but of the way they are made - it's about being local, and being built of, by and for Islay. Great job getting the distillery back to life, and now you'll have the resources to take it to the next level (and the one after that!). Good job...well done, you!

It has been announced (this past Monday), in accordance with French commercial regulations, that Bruichladdich is in talks to be acquired by Rémy Cointreau. I am very disappointed and yet happy at the same time. This sounds like a great fit for Rémy, as they have no whisk(e)y in their spirits portfolio.

I always loved Bruichladdich's products, and their swagger and "do whatever the hell we feel like" and "they're our stills and we'll use them as we damned well please" attitudes (note: not exact quotes). I hope that Bruichladdich's new corporate overlords deliver the financial stability so the distillery can last for centuries, and will refrain from interfering in what has made Bruichladdich special these last 10 years.

I'm drinking a shot of 3D3 in celebration of their good fortune! Slàinte mhòr!
Posted by Unknown at 9:51 PM No comments:

As a quick follow-up to my post of earlier today, I found out about a craft beer event in San Jose coming up 2 weeks from yesterday: The Summer KraftBrew Beer Fest in San Jose, CA. It's happening from noon until 8:00 p.m. 21-July-2012, on Post Street (between First and Market Streets).

This is the second year in a row that this event has occurred, and it's bigger this year. They expect perhaps 5000 visitors: One reason might be that admission (which includes a souvenir glass) is only $5 (beer and food are extra, of course!). I'm going to try to make it down there. I'll take Caltrain to San Jose Diridon station then light rail to the event. No driving necessary!

There is a special "Zythophile pass" for $50 that includes lots of goodies. BTW, zythophile (pronounced zeeth-o-file) is Greek for beer lover.
Posted by Unknown at 12:55 PM No comments:

Sorry for a non-whisk(e)y post, but this is timely and what can I say, whisk(e)y and beer are related.

I was having dinner yesterday at my favorite Mexican restaurant in Mountain View, CA (Fiesta Del Mar, Too). My wife was seated facing the street. Knowing that I like beer, my wife figured I'd be interested in a new store called "Jane's Beer Store." (Note: The store is open now, even though its site is still not saying that.)

Well, I wasn't 100% sure about the store (though that name is certainly, um, unambiguous!) so I had to investigate. It's everything the name promises. If you are in the area, go there NOW. To quote Jane's web site:


Jane's Beer Store is a locally owned specialty beer store located in downtown Mountain View. The store offers a wide selection of artisanal craft beers, from smaller local, domestic and international breweries. Beers are sold by the bottle, as well as in larger quantity packs including kegs. Tasty root beers and hard ciders are also featured along with handmade and unique beer accessories, such as cards, bottle openers and coasters.


I found their prices to be very reasonable and the selection to be excellent. I managed to find a beer that I have never had before, and Jane told me a story that made me know that she knows her stuff. I got this Belgian ale from Anderson Valley Brewing Company (and I thought it was a steal at $7.99 for a 22 oz. bottle...and since it's 9.0% ABV) -- Brother David's Double Abbey Style Ale: 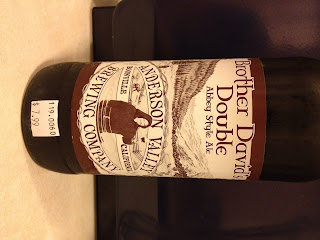 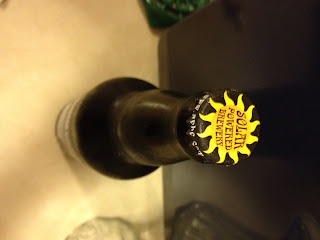 I happen to love that brewery ever since I accidentally drove past it (and stopped for a visit -- really nice people) on a road trip in 2010. I used to get kegs of their beer for my last job whenever that beer was available at BevMo (usually the Boont Amber Ale). I have never seen this ale, though, and it was a perfect choice for me because I am really enjoying Belgian-style ales lately. I will update this after I try it.

Special extra bit of news from Jane: The David in the name of this beer is David Keene from the Toronado pub (a beer mecca in San Francisco). If you have never been to the Toronado, you must go. Also, Jane tells me that Anderson Valley Brewing makes a Triple. The Triple is dedicated to David, and David is pictured on the labels of both the Double and Triple.
Posted by Unknown at 9:58 AM No comments: