And Then There Were Five

So, today was the inaugural World Whisky Day, set to commemorate Michael Jackson's birthday. No, not *that* Michael Jackson...the one that wrote extensively about beer and whisky.

I had to personalize this event somehow (and, really, I never need an excuse to buy whisky), so I looked at my whisky collection and realized that I had single-malt Scotch whisky from four out of the five regions: Campbeltown, Highland, Islay and Speyside, but I didn't have any Lowland single-malts. I never noticed this omission before, and today seemed like a great excuse to complete my set. :-)

I stumbled upon the entry for Littlemill on my old blog in a search for Lowland distilleries. I chose this particular expression because it is unique and no one is making any more of it: A fairly rare 21-year-old private bottling was available near me at K&L Wines in Redwood City, CA. It was distilled in 1990 and bottled in 2011 at cask strength (57.1% ABV) under their private "faultline" label.

Lowland malts are unusual for Scotch whisky in that they are typically triple-distilled (in other regions, double distillation is used). Sadly, many of the Lowland distilleries have not fared well over the last 50 years. For the record, I could have gone with Auchentoshan, Bladnoch or Glenkinchie if I had wanted something from a still-operational Lowland distillery; sadly, those three are the last of them.

How did I ever hear of Littlemill? My friend Joshua is an expert in Littlemill and I'm embarrassed to say that, before tonight, I had never had the pleasure. I find it to be a very subtle whisky for one so strong. The light citrus and spice notes are blended such that nothing really is disproportionate. The color is very pale, indicative of its aging in ex-Bourbon casks. You really have to concentrate to pull out pepper (I can't tell if it's black or white), and the undertones of vanilla and caramel from the ex-Bourbon casks are present, but muted, which surprised me for a whisky that is this old. I would have expected the oak to have taken the front seat by now.

I also picked this expression of Littlemill because the dates resonated with me. The distillery ceased operating around the time I moved to the Bay Area. Also, this expression was distilled the same year I was married. Here are pictures of the front and back of the bottle: 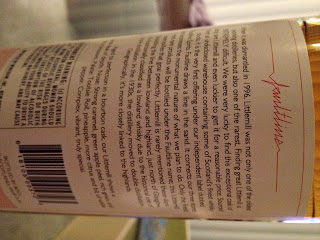 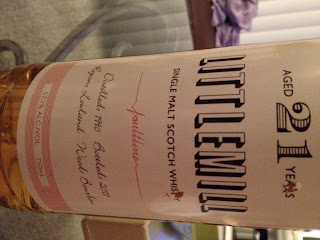 If you want, you can get a bottle from K&L. They have locations in California and they may be able to ship to you. I recommend it!

Finally, to Michael Jackson, I raise a glass in your honor and thank you for the fine writing you did to popularize beer and whisky. I wish I could have met you.
Posted by Unknown at 11:51 PM No comments: